The remains of a 90-million-year-old carnivorous dinosaur distantly related to Tyrannosaurus rex has been discovered in Patagonia by a team of paleontologists.

The remains of a 90-million-year-old carnivorous dinosaur distantly related to Tyrannosaurus rex has been discovered in Patagonia by a team of paleontologists.

The four-metre-long (13-foot-long) theropod was discovered in February 2018 in the central province of Rio Negro.

Pandemic may give traditional media a new lease of life

Cuyi relates to the place the fossil remains were found, El Cuy.

Tralkasaurus would have been dwarfed by its distant cousin Tyrannosaurus rex which could grow to 14 metres in length.

"The size of the Tralkasaurus body is smaller than other carnivores in its group – the abelisaurids," said Dr Federico Agnolin, an investigator from the Argentine Museum of Natural Sciences. This "demonstrates that the group of abelisaurid theropods encompassed a much wider ecological niche than we thought," said Mauricio Cerroni, another researcher.

The team found a skull, teeth, ribs and part of the hip and tail.

Just like Tyrannosaurus, it was a short-necked and muscular biped with four claws on each of its hind legs, and arms that were very short in comparison to the rest of its body. The bones of its extremities were light and hollow.

"This new discovery helps us to define the ecological habits of carnivorous dinosaurs as well as herbivores," said Cerroni.

According to the researchers, Tralkasaurus possibly fed on small herbivore dinosaurs called iguanodonts that have been found nearby by the same team of researchers.

World Bank lends US$300 million to Argentina to tackle virus 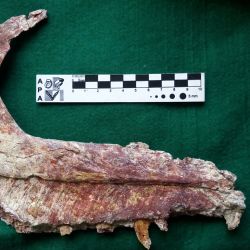 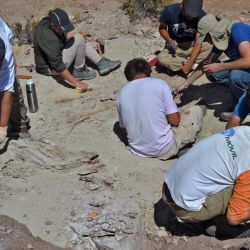